July 29, 1999. Vasuki Nesiah was on her way to meet Neelan Tiruchelvam when she heard he would not be able to keep their appointment. As his course assistant, Vasuki had been working with Neelan, helping him to prepare for a constitutional law class that considered how the Tamil epic Silapadikaram and the Greek tragedy Antigone could be ‘sources’ of law, ethics and politics as much as any constitution or legal tome.

Neelan would never arrive for their meeting. He died that morning at the junction of Kynsey Road and Rosemead Place when a suicide bomber stepped into the path of his car. Vasuki rushed to the side of Neelan’s beloved wife. “It was Sithie’s superhuman strength which helped us all cope with that terrible day and its aftermath,” she remembers.

As the news spread across the island and the world, the women were among thousands united in grief, each keenly aware that this was a loss that was both deeply personal and yet collective. The author Amitav Ghosh was in New York, and was horrified to hear the news. “At that time he, more than anyone else, represented the possibility of a just resolution of Sri Lanka’s political problems, because of his refusal to compromise with ethnic extremists of any sort,” Amitav says. Back home, for Vasuki too, Neelan had been a vital public presence, one who upheld a robust, generous and pluralistic vision of their collective future. “A bleak period in Sri Lanka’s history felt even bleaker.”

In the years leading up to this moment, it would be fair to say Neelan had lived an extraordinary life. His roles were numerous: a lawyer by profession and a senior partner at Tiruchelvam Associates, he was also recognized as a distinguished public intellectual who stood at the nexus of scholarship, activism and politics and who had to his credit many publications on law, social justice and development.

As the founder and director of both the Law and Society Trust and the International Center for Ethnic Studies, Neelan was a dedicated institution builder; a human rights advocate who was key to establishing the Human Rights Commission in Sri Lanka and gave the impetus for the South Asian Human Rights Initiative; a civil society activist for democracy who initiated the South Asian Elections Monitor Group and would serve as a member of several international election monitoring and expert missions to Pakistan (1988), Chile (1988), Kazakhstan (1992), Ethiopia (1992) and South Africa (1993). Finally, as a politician and parliamentarian he helped to shape a groundbreaking constitutional proposal for a decentralized and devolved political structure that many hoped would hold the key to peace for Sri Lanka.

After his death, Sithie established the Neelan Tiruchelvam Trust in 2001. To date, it is the only Sri Lankan grant-making organization supporting work done by community organizations in the areas of human rights, good governance and peace-building.

Reflecting on these many identities and his enduring legacy, Gowher Rizvi, the Bangladeshi historian, scholar and academic said of Neelan that his life was a triumph of optimism over cynicism. “Some are intimidated by darkness but Neelan choose to light candle; some despaired at the violence but Neelan drew his line and chose to fight his ground; faced with what at the time seemed insuperable and overwhelming problems, some chose to bury their heads in the sands but Neelan brought succor and became a beacon of hope; and even when some people cynically accept that injustice, poverty and violence are a part of the society, Neelan decided to take a stand and fight oppression in any way he could.”

Now Neelan was gone, and Sithie and his friends were faced with the question of how to best remember him. Ambika Satkunanathan, then a young lawyer, remembers that Sithie wanted something unconventional and that over time and across several different efforts, this notion crystallized into the idea of having a lecture series. As the then Chair of the Neelan Tiruchelvam Trust, Sithie brought the series under NTT. Many of the lectures were paired with workshops and on Neelan’s birthday they would host a cultural event of the kind he so enjoyed.

The introduction to the Commemoration Programme held in 2000 stated: ‘On July 29th, 1999 life seemed to stop and we were left with darkness, until darkness could be no more. And Neelan challenged us, in death as he had in life, to tread beyond the shadows cast by hatred, fear, anger and desolation.’

Over the next two decades, the lectures and performances selected were always a reflection of what would have interested Neelan himself, says Ambika, who today serves as the Chairperson of NTT. “He was someone who loved literature, and loved the arts. He made it a point to educate himself about these things. We saw too how Neelan was always someone who wanted to share this knowledge, and to create space for thinkers and artists to function and to amplify their voices. That was Neelan to the core and that is how we chose to honour his memory.”

The earliest lectures were often focused on human rights and constitutional law, but over time, the series expanded to include musicians, writers, artists, journalists, researchers, lawyers, transitional justice practitioners and historians. This evolution began to reflect Neelan’s interests beyond just the professional. “It was organic in a sense because we too began to look more broadly at the common elements that wove the interdisciplinary nature of his interests together,” says Ambika.

Speakers would bring with them stories of the wider world: Ian Martin who had been a special representative of the UN spoke of challenges of balancing justice and human rights with political realities in post-conflict East Timor, El Salvadore and Guatemala; Alexander L. Boraine then President of the International Centre for Transitional Justice looked at truth and reconciliation in the South African context; Galuh Wandita, Director, Asia Justice and Rights took us to Jakarta, Indonesia where survivors stood before the truth commission to share their stories;  A professor of Law, Ronald C. Slye drew on his experiences with transitional processes in South Africa, Cambodia, and Kenya to suggest how Sri Lanka might approach difficult issues and make strategic choices in its own context.

British Israeli architect Eyal Weizman’s lecture on the use of forensic architecture in places of conflict, such as Palestine and Pakistan, highlighted how multi-disciplinary collaborations could lead to more effective human rights investigations. The musician and public intellectual T.M Krishna argued that culture is far more than an identity; it is an experience and one that could prove transformative.

Director of the Southern Asian Institute at Columbia University, E. Valentine Daniel quoted Shakespeare in his lecture on remembering the unfallen while Romila Thapar, an Emeritus Professor of Ancient Indian History, referenced the importance of oral histories alongside historical texts in her lecture on history and identities. The former vice-chancellor of the University of Delhi, Upendra Baxi in a ‘conversation with Neelan’ began with the lines from John Donne: ‘One short sleep past, we wake eternally, And death shall be no more; Death, thou shalt die.’ 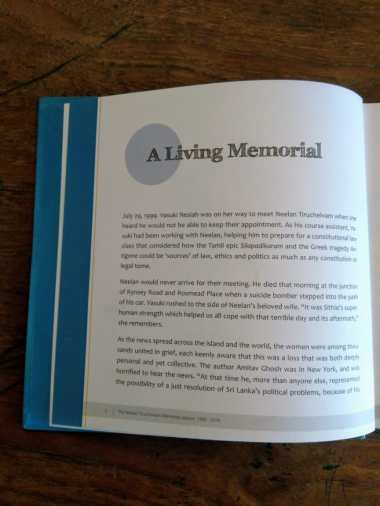 The Indian scholar, author and environmentalist, Ramachandra Guha was interested in how to make South Asian cities habitable, a concern he shared with British Parliamentarian Clare Short, who delivered her lecture on the nexus between poverty, inequality and environmental degradation.

Then a staff writer with the New York Times, Steve Coll delivered notes from America since September 11. Narendra Subramanian and David Miller, both professors of political science stood behind the lectern to emphasize the need to nurture a pluralistic polity and to confront the challenges of democracy.

Some speakers drew on the lessons they believed Neelan’s life offered. Michael Ignatieff, former Leader of the Liberal Party of Canada, spoke of the causes to which Neelan had dedicated his life: “He believed in politics, and because he believed in politics, he believed in compromise.” In his lecture on the duty and concept of responsibility to protect, Gareth Evans, President of the International Crisis Group noted that “Neelan knew that political will is never waiting in a cupboard to be found: it has to be nurtured and generated, campaigned for persistently and relentlessly.”

Walking in Neelan’s footsteps, NTT too had to embrace persistence to ensure the lecture series would survive. Amitav still remembers the day in July 2001, when he arrived to deliver his talk: “Katunayake airport was filled with the burnt-out skeletons of aircraft that had been blown up by the LTTE. It was a grim and horrifying sight, a shocking contrast to the Sri Lanka I had known during my childhood…” However, he did not let what he saw deter him, and neither would the others. NTT would continue to welcome speakers to these shores even in the year the tsunami struck, even at the end of the war, through the pivotal elections of 2015, and now in the wake of the Easter Sunday bombings.

As a result, for Sri Lankan audiences the lecture hall hosting these talks has become a space of quiet resistance, withstanding the politics of tyranny, identity and censorship that might hold sway outside it. “We are not about censorship, we are not afraid. So over the years, we have found a way to talk about even very sensitive issues, but to do it cleverly,” says Ambika, explaining that it has felt like a critical mission to safeguard the room for discourse that Neelan helped carve out and support in his own lifetime.

In 2019, NTT will mark twenty years of these conversations. It is a moment to both grieve Neelan and Sithie, and to celebrate lives that continue to illuminate our path, to give us hope and direction; a chance to engage with perspectives from around the world and to find camaraderie in the face of our shared challenges.

In the end, says Vasuki, “The lecture series is as close as we can get to a living memorial. It has been a prism capturing this richness and shining back a new dimension every year.”

Lunch date with this crowd.
Old friends. Thanks to @isurupera for the picture. 💕
@isuri.mh makes these gorgeous dumplings to her own recipe and serves them with a fiery chili oil laced with cinnamon and a chili paste made with, among other things, coriander. Now I just want to eat them again.
@nushselvarajah and @manikyak serve up a bright, beautiful brunch.
Such a fun evening with these two.
Jungle swing.