From the air, the Yoyogi National Gymnasium – built for the Tokyo Olympics of 1964 – resembles nothing so much as a leaf that has just fluttered to the ground. Designed by Kenzo Tange, its long elegant curves and ribs seem almost organic and yet its material is concrete. His first encounter with it, when he was just ten years old, filled Kengo Kuma with a desire to become an architect. “It was a very big trigger for me,” says Kengo today, “it was a concrete monument, a monumental gesture to the city.”

There is poetry to how, over 50 years later, Kengo has been commissioned to design a stadium for the latest edition of the Summer Olympics, to be held in Tokyo in 2020. While his love for Kenzo’s work is still unquestioned, Kengo is now an internationally celebrated architect in his own right – and his design is in many ways the antithesis of 1964’s efforts.

In the new stadium, steel and concrete will be replaced in large sections with wood. Cedar will be brought here from 47 prefectures, covering the spectrum from the lighter colours of the south to the dark shades of the north and rice paper is to be used in the interiors. A more recent focus on cost-effectiveness and sustainability in all the designs for Olympic infrastructure means a definitive change in the envisioned use of the space.

For starters, in between sporting events, the stadium won’t be locked up, instead it will serve the community: embedded in a lovely park complete with a creek, it will also have a sky walkway that will be open year round. Kengo is pleased to report that musicians have shown an interest in using the space as a concert venue. “It will fit the period we are in now, where we want quiet and calm and natural materials all around. It is a totally different solution,” he tells the Sunday Times.

It is an approach that Kengo suspects Geoffrey Bawa would have approved of. In Colombo to deliver the annual Geoffrey Bawa Memorial Lecture, this one commemorating the architect’s 100th birth anniversary, on July 23, Kengo paid heartfelt tribute to Bawa, who he said had inspired architects around the world and had a profound influence on his own practice.

We meet Kengo in a room adjacent to the lecture hall at the Sri Lanka Foundation Institute speaking for a few minutes before Kengo takes the stage. He does not know it, but the hall is filling up fast, and by the time he steps up to the podium, every available corner will be taken, as people stand in the aisles and sit on the floor in front of the stage. It is a tribute to Kengo’s stature but also to Bawa’s enduring place as a giant of Sri Lankan architecture, and his role in developing a new lexicon which was so sensitive to the landscape and the artistic traditions of this island he called home.

“Bawa mixed western culture and Sri Lankan culture and his way of doing this was very different from the modernist culture that prevailed at the time,” said Kengo, adding, “he changed the history of architecture in the 20th century and after him, we architects have gone in new directions.”

Kengo founded the Spatial Design Studio in the 1980s, which later became known as Kengo Kuma and Associates, with offices in Tokyo and Paris. He is an established lecturer and has taught at several universities around the world, including Columbia University, University of Illinois and Keio University, and is now professor at the University of Tokyo with his own architecture urbanity and design laboratory (Kuma Lab).

Like Bawa, Kengo’s architecture is very much of its place, drawing on his deep love of Japan and its traditions. He grew up in Yokohoma, in “a small wooden house built in the 1930s” and his memories of the time are manifested, for instance, in the use of tatami mats whose aroma Kengo says he has associated with peaceful sleep ever since he was a boy. He is interested in reviving dying arts, and has found ways to incorporate local materials and techniques, including thatch work, into his projects.

In 2011, in the wake of a devastating tsunami which slammed into Tohoku, and destroyed thousands of lives and homes, Kuma found himself confronting a need to reimagine our relationship between the built environment and the natural world – it was then he began experimenting with chidori toys, which employ a system of interlocking wooden planks and do not require glue to hold their shape. He created a range of furniture and even used this technique in larger construction projects, such as the GC Museum in Aichi Japan, where the bearing elements are 10 metres high, with a square section of 6×6 cm.

Though he seems always to cast an eye over his shoulder, Kengo is also in constant forward motion. In particular, he finds ways to experiment with new materials such as by pairing carbon fibre with bamboo to push both form and sustainability.

Over time, his appreciation of the natural world has led him to test the boundaries of the built environment, extending outward or inviting the world in. It is a key element of his philosophy, and several of his structures have long corridors that bisect them or have a large void that cuts through the structure, providing a tangible, deeply calming connection between indoors and outdoors and creating vistas that stretch to the horizon. He has a deep love of these empty spaces, which the Japanese call ‘Ma,’ and which Kengo believes creates space for the human spirit.

When it comes to his facades, he looks again to the world around for inspiration. For instance, in the V&A Museum in Dundee, the building leans and reaches skyward with a rocky façade designed to mimic a sea cliff. “There is no conversation between a human being and a concrete wall,” he says, “but something inside us responds to the textures of nature.” 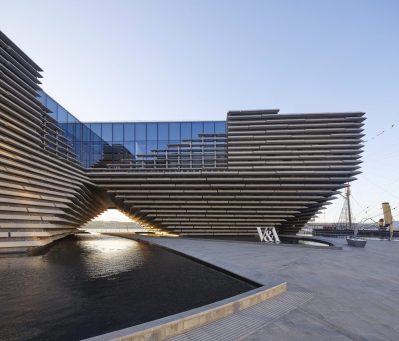 Both his curiosity and love for the natural world are on display in his design for Bawa’s centenary celebrations. The installation will sit on the lawns in Lunuganga, and utilizes kithul to create a beautiful, long ribbon that curls in on itself, and seems light enough to be lifted by the wind. His engagement with Bawa will also extend to renovating Club Villa Bentota, a project which is nearly complete. Finally, Kengo has been commissioned by Toyohiko Murakami, Chairman of Bansei Group to design a new hotel, which will be located between Ahungalla and Bentota. The architect says he has already begun to draw inspiration from Sri Lankan craftsmen, and plans to showcase local materials like kumbuk in the building.

Throughout he has been inspired by Bawa, who he says had a deep respect for his context, so much so that even the plants on the site impacted the final design. “His space is not nostalgic, it is always new,” says Kengo. “I want to follow the same approach.”

Published in the Sunday Times, Sri Lanka on July 28, 2019. By Smriti Daniel. Pix by Amila Gamage.

Scale
We walk here, more than we've walked in years. I miss tuk-tuks but love autumn. It gets colder every day, and I may have already maxed out on my layers. Send me some sunshine.
Autumn walks - and one koala sighting.
So much beauty in every detail of these leaves - lines that look painstakingly hand stitched, colours so vivid they don't need a filter. (And ferns were here on Earth before the dinosaurs.)
I worry about the people I love, scattered all around the world. Those with no access to oxygen and those in ICUs, those afraid to go out, those exhausted by staying in, those with just one shot of the vaccine, those who don't know if they'll get it this year; those obsessed with the news, those hollowed out by it. All of us going through this strange, surreal time; helpless, sometimes hopeless. And all I can do is send love and wait, then send more love to you, to you and you.
Our neighbour Sonia is 75 years old and our friendly guide to the neighbourhood. This park is on her daily route, a small nature preserve where native trees and shrubs grow undisturbed. This is Kaurna land and the air is filled with the sound and scent of eucalyptus. In some places you cannot see the soil for the bark and leaves on the ground.
Loading Comments...
Comment
×