Sunethra Bandaranaike remembers turning down the driveway to Lunuganga with the world’s first-ever female prime minister in the seat beside her. They had been invited by Geoffrey Bawa to visit his garden estate, and her mother’s first impression was guarded to say the least. “It looks like we are driving through a forest. What is this?” Sunethra remembers Sirimavo Ratwatte Dias Bandaranaike asking.

By this time, Sunethra and Geoffrey were friends—and she didn’t need her mother’s eventual confirmation to know that Lunuganga was the work of a genius. “I was 29 when I met Geoffrey,” Sunethra recalls, adding that it was around 1972, and the architect was roughly her mother’s age. On the surface, they had little in common. “I had no understanding of architecture; it was a building and I liked it or didn’t like it, and that was all.” But Geoffrey seemed to enjoy their conversations. If he hadn’t heard from her in a few days, Sunethra would pick up her phone to find him on the other end.

When they did meet, the two would break out the whiskey, light up cigarettes, and talk buildings. He gave her books he thought she might find interesting and took her with him to visit his sites at Kandalama, Galle and Wadduwa. Sunethra says it grew into a close relationship. “I wasn’t one of his architectural people. I was just a good friend. He trusted me and I trusted him,” she says. 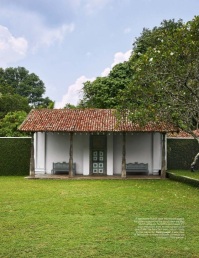