When Dr. Asha Abeyasekera spoke to a woman named Rojani in 2018, she heard that Rojani’s family had lived in 219 Watte since the 1950s. Rojani’s father had even been given a house-ownership card, issued by then President Premadasa’s government. “She had this whole file, though she was illiterate, she had kept these documents and proved that her family actually owned the land they lived on,” Asha recalled. It didn’t seem to matter. In 2014, Rojani was evicted from her home and resettled in an apartment block in Muwadora Uyana.

Asha, a senior lecturer at the Faculty of Graduate Studies, University of Colombo, was speaking at a symposium on Urban Planning and the making of a World-Class City held at the International Centre for Ethnic Studies. The event brought together researchers and activists from Sri Lanka and Pakistan who have since 2017 been conducting a comparative research study on the impact of infrastructure-led urban development projects on kinship and care networks in Colombo and Lahore. Complementing the discussion were perspectives from India.

Joining Asha from Sri Lanka was researcher and activist Iromi Perera who noted that their focus has been on working-class poor communities relocated to state-sponsored high-rise buildings under the aegis of the Urban Regeneration Project.  The research they presented draws a picture of people who have called Colombo home for generations.

Rojani’s case was also an illustration of the kind of financial strain the move had placed on many working-class families. She was given no compensation for her land, and in fact, would have to pony up one million for the apartment. The loan would lock her in debt for between 20 to 30 years. For 10 of those years, restrictions were placed on selling, renting or mortgaging the apartment.

Iromi used photographs to illustrate that the alleged slums that had been demolished included houses that were built with brick and mortar, sometimes three storeys high and well maintained. “What they are actually doing is that they are erasing a long history of investment in housing, not just by the people themselves, but also by the state actors like the NHDA [National Housing Development Authority], the Ministry of Housing and the CMC [Colombo Municipal Council] who have for a very long time invested a lot in the infrastructure and the upgrading of these houses,” she says.

It’s disturbing that the move to these high rises has forced some families further into poverty. Not only had they lost their land and any investments in their old homes, but they had to contend with loan and maintenance payments and in some cases shockingly high utility bills. This at a time when many of those surveyed reported their livelihoods had been effectively gutted. For someone who works as a domestic labourer or runs a small shop, location is everything. Poor transport links or sheer distance made it hard for many.

There was also a social aspect which could make the transition hard. Joint families who had occupied larger homes were now only offered a single apartment in exchange forcing 15 people, in some cases, to share the new space. In the first round, communities weren’t moved together and so old neighbours might find themselves scattered across different floors severing once comfortable relationships.

Design issues also meant communities experienced further isolation. There were no community spaces or playgrounds, instead the corridors were long and dark and the buildings in the second phase didn’t even have balconies. Homes were too small to host guests for a meal or to sit with a body overnight as is customary at funerals. People felt sundered from their past and from their traditions. 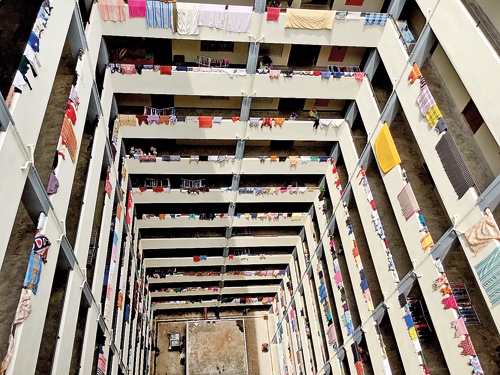 Authorities struggle with their own policies

These are the kind of intangible social and cultural factors that have to be considered when creating a policy, said Vaibhav Dutt who along with Yashwin Iddya was on the panel representing Fields of View, a public policy research outfit based in Bangalore. Vaibhav argues that real-world problems are complex, intertwined and diverse and notes that policymakers often focus on only tangible inputs and quantifiable data to the detriment of the project in question.

“There is no one answer and it’s not as if we have an ideal situation which will resolve all the issues that exist,” said Vaibhav. “There are constraints and resources under which all the different actors are operating.”

This is demonstrably true of Colombo where the UDA is now struggling on multiple fronts, most notably on maintenance in the high rises where it has found itself in the position of a reluctant landlord while sales of the cleared land that it considered underutilized hit more than one obstacle.

The same is also true of Lahore, according to Dr. Ammara Maqsood a lecturer in Social Anthropology at the University College London and Fizzah Sajjad, an urban planner with a Masters from MIT. Both women presented findings from research in Lahore where they studied the impact of the Orange Line Metro Train project on two residential communities in Anarkali and Parachute Colony who were dispossessed during construction.

There are key similarities between Colombo and Lahore: in both, there were many instances where due process was neglected by the state and in some cases, families faced systematic intimidation when they refused to move. However, in Lahore, the government did not offer new homes but did offer compensation to affected communities after the latter mobilised. Over the course of several months, it became clear that state actors were themselves forced to stick to certain terms laid out by Chinese investors, and that the compensation scheme was so poorly thought out that state actors themselves were unclear about it.

“Just as the community is very fragmented so is the state you are dealing with,” said Amara. “The state was equally unhappy with its own processes.”

20 years down the line

Dr. Gautam Bhan from the Indian Institute for Human Settlements also spoke at the event, bringing to the table experiences from the city of Mumbai which first started building towers like those in Sri Lanka 20 years ago. In his presentation, he noted that we often focus on the idea of adequacy – whether a house is a good one, what materials it’s made of, how large its floor space is – when we should also be considering affordability and viability.

In particular, the latter must answer the question of whether the new occupant can make a life in this home, whether there are work and transport links close by, whether they feel a sense of integration with their broader community and even whether the home feels like it can evolve to match their aspirations and changes in their family’s structure.

“Housing is not just houses. It is time, it is life, it is wage,” said Gautam, emphasising that housing could not be disconnected from other parts of low-income lives. For any such project to be a success, it would need to match the trajectory of such families, which were non-linear, incremental and inter-generational. Unlike your average middle-class family, a low-income family’s fortunes could and did fluctuate based on issues like seasonal work and illness in the family. Progress was made painstakingly across generations, but it is a form of tried and tested growth that has served these communities well.

When it comes to housing, this is an argument for upgrading homes in situ rather than relocating communities. It is a model that has worked well in places like Thailand where an ambitious national programme called Baan Mankong set a target of improving housing, living and security of tenure for 300,000 households in 2,000 poor communities in 200 Thai cities.

It is particularly important that we consider such options when we look at Mumbai 20 years on, and see how the towers have grown taller while maintenance challenges multiply and occupancy rates drop. A study published in 2018 found that slum-dwellers dumped in tightly-packed towers with poor light and ventilation were reporting higher rates of tuberculosis.

As Colombo looks to its future as a ‘world-class city’ these questions are fundamental. “I think we like this idea of a world-class city – it’s clean, it’s green, there’s a lot to do – but we haven’t adequately spoken about who this city is for,” says Iromi. “Just from a policy perspective, it’s one thing to want a slum-free city. The problem is that these policies don’t talk about how we can make it a poverty-free city.”

"...the language of the body did not suit the soul. Our spirits are eternal, they don't tear or heal - they change. The question should never be, how do I heal from this, it should be: who am I changing into?"
Weekend jubilation to weekday exhaustion in two pictures (and it's not even Wednesday).
Summer garden blooms.
In praise of lighthouses.
She saw seals on the seashore.
Trees here still bear the scars of that black summer, but the forest is growing back and the flowers are blooming.
Loading Comments...