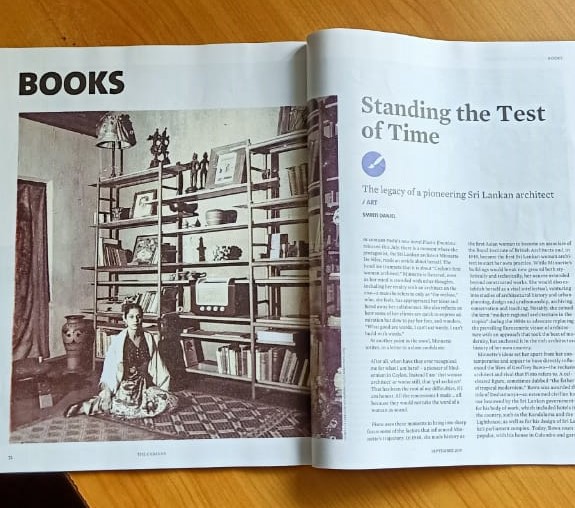 …Pinto uses these moments to bring into sharp focus some of the factors that influenced Minnette’s trajectory. In 1948, she made history as the first Asian woman to become an associate of the Royal Institute of British Architects and, in 1949, became the first Sri Lankan woman architect to start her own practice. While Minnette’s buildings would break new ground both stylistically and technically, her oeuvre extended beyond constructed works. She would also establish herself as a vital intellectual, venturing into studies of architectural history and urban planning, design and craftsmanship, archiving, conservation and teaching. Notably, she coined the term “modern regional architecture in the tropics” during the 1950s to advocate replacing the prevailing Eurocentric vision of architecture with an approach that took the best of modernity but anchored it in the rich architectural history of her own country.

Minnette’s ideas set her apart from her contemporaries and appear to have directly influenced the likes of Geoffrey Bawa—the reclusive architect and rival that Pinto refers to. A celebrated figure, sometimes dubbed the “the father of tropical modernism,” Bawa was awarded the title of Deshamanya—an esteemed civilian honour bestowed by the Sri Lankan government—for his body of work, which included hotels in the country, such as the Kandalama and the Lighthouse, as well as for his design of Sri Lanka’s parliament complex. Today, Bawa tours are popular, with his house in Colombo and garden estate in Bentota typically receiving hundreds of visitors every month. By contrast, even in Sri Lanka, Minnette does not enjoy the same easy recognition.

Public interest in Bawa has grown with every new book and restoration of an old project, but acknowledgement of Minnette’s work feels almost episodic. The few of her buildings that remain standing in Colombo and Kandy do not draw busloads of tourists, and what could have been an astonishing archive and historical record of her work and personal correspondence today exists for the most part only on the pages of her autobiography, and on the walls of a hotel run by her niece.

The release of Plastic Emotions is likely to generate a fresh wave of interest in Minnette, although Pinto focusses on producing an intimate portrait of the woman rather than on recounting all the particulars of her professional accomplishments. The novel follows Minnette in her journeys through Europe and India, but it is anchored in a love affair between Minnette and the Swiss modernist architect Charles Édouard Jeanneret, better known as Le Corbusier. He was married and had already acquired immense fame by the time he met her, and the novel finds him embarking on a design for a new capital for Punjab at Chandigarh.

What Minnette would have made of this blurring between her person and the character in the novel—her loves imagined, her sorrows dissected, her fictional friends an efficient amalgamation of the ones who made up her circle—is debatable. Even in her 1998 autobiography, The Life and Work of an Asian Woman Architect, Minnette is proud and thoughtful, open with the details of who she met and what she did, but seldom laying bare her heart.

For someone seeking a sense of who Minnette was, both the novel and the autobiography offer only partial truths: the former because it is unapologetically a work of fiction, and the latter because it is so deliberately curated…

Read the full essay, published in the September issues of The Caravan. Text by Smriti Daniel.