There are few people who know their way around a Sri Lankan garbage dump as well as Dr.Randika Jayasinghe. However, while you might expect the research scientist to be studying landfill composition or whether toxins are leaching into the groundwater, Randika is actually more interested in talking to the communities in the area.

“I look at waste from a social justice perspective. Quantitative figures are important, but it’s the qualitative data that is really revealing,” says the lecturer and  Head of the Department of Biosystems Technology at the University of Sri Jayewardenepura. In fact, Randika’s PhD thesis at the University of Western Australia (UWA) was focused on developing poverty reducing solutions for sustainable waste management in Sri Lanka.

She remembers her fieldwork for the degree, when she was expected to visit all these garbage dump sites and low income settlements to look for people who were recycling the waste or using it to fuel small businesses. “People could not understand why a young woman was digging around there. Initially, they would look at me with a lot of suspicion, sometimes they  still do,” she says, explaining that building trust is always a first step.

As she got to know the local sector better, Randika quickly understood there was a complex system in operation. There were many informal waste workers, working as individuals but also as part of community-based organisations. The more organised among them went house-to-house looking for specific items or had arrangements with local businesses and factories that allowed them to collect items such as packaging materials or even textiles. Because many businesses would not pass a health or quality check, they tended to be reluctant to let observers in.

This was a concern that tapped into Randika’s interest, in understanding the social impact of waste management, particularly in relation to women who played a huge role in the sector. “Many of these businesses are small companies, and they are home-based. Women make up the backbone of such enterprises,” she says, adding that however where men and women are collecting waste together, men tend to get the best pickings, leaving women to follow. Being aware of such issues means Randika is able to design sensitive solutions that attempt to balance out these concerns.

This need to balance idealism with pragmatism saw Randika coming home after her PhD to set up a chapter of Waste for Life in Sri Lanka in 2015. An international collaboration, it built on the work of Randika’s PhD supervisor Professor Caroline Baillie at the University of Western Australia, and her co-founder, Eric Feinblatt. For Randika, the immediate appeal of the project was that it did not rely on high-tech or advanced technologies, instead it was affordable and simple. She knew it could work in Sri Lanka.

The project itself would have two parts: in the first, they would establish training facilities in universities to really analyse what challenges and opportunities existed. They established two such centres at the Department of Chemical and Process Engineering, University of Moratuwa and the University of Jaffna, Faculty of Engineering in Kilinochchi in 2015. This year, a third centre will be opened at the Faculty of Technology, University of Sri Jayewardenepura. Since they began operations, hundreds of community representatives as well as stakeholders from the industry have benefited from training and awareness workshops.

The next phase of Waste for Life in Sri Lanka was identifying communities they could work with on multiple pilot projects – these groups would have to have easy access to waste so they did not have to meet high transportation costs. A year after establishing the training centres, the team at Waste for Life were able to start their pilot projects.

Starting out, they identified three communities two from Jaffna and one from Negombo. Waste for Life provided the equipment, the training, and all other ancillary equipment needed. Working with community-based groups they sought to see how they could support small-scale recyclers and teach them how to work with different materials, not just plastic but fabric and natural fibres as well. 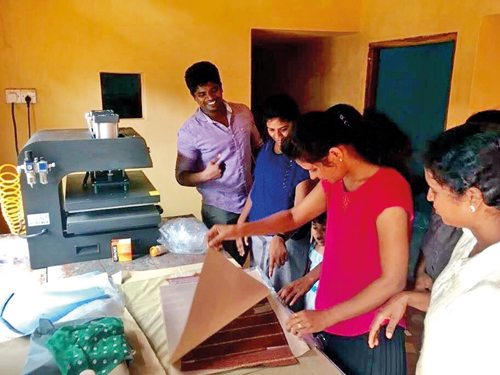 They found early success with a Negombo-based recycler, named Jayantha Kumarasiri. They supported Jayantha as he set up the brand Katana Upcycle. He was encouraged to branch out from just working with plastic to also incorporating discarded fabrics such as saris and even curtains into his products. Today, the fledgling enterprise produces everything from purses to file folders. Jayantha has since been able to employ 8 – 10 women in the area.

In Jaffna, Waste for Life introduced a banana fibre composite material and started manufacturing products under the brandname Yaal Fibre. The final community project was called Paalam Products, and supported war-affected women through livelihood interventions. Both projects immediately appealed to women many of whom were single heads of households or war widows. Today, they produce folders, coasters, place mats, menus, and files for clients as diverse as hotels and travel agencies. You can find some of these products at Good Market, PodiKade, Barefoot, and Lakpahana.

Meanwhile, Randika is fielding more requests from within the industry as well as from women and youth groups across the country. Waste for Life Sri Lanka’s partnership with Dilmah Conservation (Dilmah Recycling) has resulted in the creation of a facility which can convert a significant portion of Dilmah’s tea packaging waste materials into reusable items.

However, Randika knows the road is long, and Sri Lanka has a long way to go when it comes to waste management. “I think things are getting better,” she says, “but we still need more awareness and greater discipline when it comes to sorting and managing our waste. Only then can we really start talking about social and environmental sustainability.”

Published in the Sunday Times, Sri Lanka on April 21, 2019. By Smriti Daniel.

Old friends. Thanks to @isurupera for the picture. 💕
@isuri.mh makes these gorgeous dumplings to her own recipe and serves them with a fiery chili oil laced with cinnamon and a chili paste made with, among other things, coriander. Now I just want to eat them again.
@nushselvarajah and @manikyak serve up a bright, beautiful brunch.
Such a fun evening with these two.
Jungle swing.
This view. A reminder of the vast wonderfulness of the world, calling my name, asking me to come and explore.