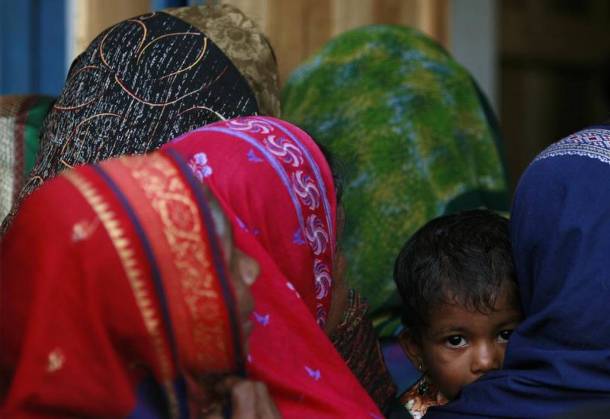 COLOMBO (Thomson Reuters Foundation) – When her daughter turned seven, and it was time for the “khatna” – a female genital mutilation (FGM) ritual – a close friend advised Naqiyah to try the butter knife method.

A trusted doctor in the Sri Lankan capital Colombo would simply run a blunt knife against little Tanzeem’s vagina, and Naqiyah could tell her relatives that the ceremony had been carried out. There would be no bleeding, no pain.

FGM, which can cause serious physical and psychological problems, is more commonly linked to African countries which have led international efforts to end the practice.

The ritual ranges from being nicked by a blade to the full or partial removal of the clitoris, which is seen as a source of sin.

By insisting on the butter knife, Naqiyah could at least ensure Tanzeem’s body wasn’t disfigured.

Naqiyah, who did not want to reveal her real name, had undergone the trauma of the khatna herself and even after several decades she was able to recall every detail.

The room where a doctor, his wife and an assistant were waiting; her legs spread and held down as the doctor approached with a blade, inflicting agonizing pain with no anesthetic.

Throughout the ordeal, Naqiyah’s favorite aunt stood by her side, attempting to comfort her. After a period of recovery, Naqiyah was showered with gifts and attention as relatives and friends gathered around to celebrate the rite of passage.

Naqiyah has never even spoken to her husband about the details of what happened to her, and the first time she shared her story was by writing one of 15 testimonials on FGM in Sri Lanka that was submitted to the National Child Protection Authority, multiple parliamentary committees and the Human Rights Commission.

Compiled by women survivors and activists, the June report is the first official submission to Sri Lankan authorities on the practice of FGM on the island.

“We never thought it was happening in Sri Lanka,” Sudarshini Fernandopulle, a member of parliament and specialist in public health told the Thomson Reuters Foundation.

Fernandopulle said there was a dearth of studies and no public data on the prevalence of FGM in Sri Lanka, a practice unregulated by law.

Although it is not mentioned in the Koran, the Bohras consider khatna a religious obligation. Secrecy shrouds the practice but among the Bohras, who number about 3,000 in Sri Lanka, anecdotal evidence suggests as many as 70 to 90 percent of women have undergone the procedure.

And the practice is not limited to the Bohras, said Madusha Dissanayake, policy director at Sri Lanka’s Family Planning Association.

Dissanayake has been collecting testimonies from the Moor and Malay Muslim communities – who number nearly 2 million according to the 2012 census – and has found some families performing FGM on the 40th day of a girl’s life, with the help of medically unqualified women known as osthi maamis.

The All Ceylon Jamiyyathul Ulama, a religious association with widespread influence in Sri Lanka’s Muslim community, issued a fatwa in 2008 declaring the practice mandatory, a copy of which was included in the submission on FGM.

“Right now we have mothers subjecting their daughters to this practice,” she said. The health consequences for women range from severe infections and swelling of genital tissue to problems urinating.

Complications in childbirth and increased risk of stillbirth or neonatal death are also associated with FGM.

Many women carry the psychological trauma with them all their lives. “Children cannot give consent, it is a violation of a child’s rights,” Fernandopulle said.

With a group of female lawmakers, she has engaged with the ministries of health and justice in an effort to eradicate the practice. “We hope we can bring about some positive change,” she said.

The survivors who talked to Fernandopulle and her colleagues said they felt part of a wider battle within the Dawoodi Bohras, a Shi‘ite Muslim sect that numbers about one million in India with sizable communities in the United States and Australia.

“I see the campaign against FGM as responding to the broader campaign by Muslim women in Sri Lanka,” said lawyer Ermiza Tegal, who was involved in preparing the submission.

“They are creating a space to raise their voices on a harmful cultural practice that predates Islam.”

Tegal said she thought banning FGM would allow women to protect their daughters, and resist pressure from elders in the community, as debate around the practice slowly opens up.

Fatema, an FGM survivor who did not want to give her name, was already in her twenties when she discovered that her clitoris was damaged. As one of the survivors who gave her testimony for the FGM submission, she says she risks being ostracized by her community for speaking to outsiders.

Fatema has actively campaigned on the behalf of the next generation of girls.

“For me it’s always been a matter of one child at a time. It’s one life that we have made a difference to. One future not tampered with, one life without repercussions of FGM – that is huge.”

Her mother Ismat is supportive. In her generation, the khatna was simply the norm and not discussed. “I was not able to speak against it. I did not have the support,” she said.

She was told that khatna had to be done to ensure girls were pure and virtuous, but her conversations with Fatema have changed her perspective. “I have raised my children to know that it is the mind that acts. It is not the body,” she said.

Naqiyah too, decided the pain and humiliation of FGM would stop with her generation.

She and her husband decided they didn’t even want a symbolic “butter knife” ceremony for their daughter, standing against tremendous pressure from family and friends.

“Much as I am angry about what was done to me, I can’t be angry with my parents because they were only doing what had always been done,” she said.

“They don’t know how damaging this is. But we know, and I couldn’t imagine facing Tanzeem and telling her I did this to her because of social pressure.”

Lockdown moon
The Cube - striking, ambitious and sometimes downright bizarre - belongs to d'Arenberg, a winery over a 100 years old which produces a brilliant sparkling red, among other things. Someone with a sense of humour named the wines. Suda and I loved The Innocent Weed, The Laughing Magpies and The Dead Arm, but The Cenosilicaphobic Cat (named for the fear of an empty glass) wins the prize. Go for the wines, stay for the art gallery.
Lovely and a little intimidating. There are poisonous blue-ringed octopi in the shallows here and whales off the coast. These pebbles and rocks are gorgeous, but most so when juxtaposed. Pick one up, and it seems to lose a little colour. There's a metaphor there, somewhere.
The earth here tells a story that goes back 280 million years to when a glacial lake covered this land. Even after all these aeons, you can read it in the jagged cliffs of the amphitheatre, in the layers and ripples of the Sugarloaf, and in the smooth surfaces and deep grooves cut by ice marching inexorably across stone. I particularly love finding the 'erratic' rocks, picked up by glaciers and carried for miles in an adventure in slow motion, never knowing where they were going to land up.
Koala dozing the afternoon away, glimmering streams and green grass, golden caves reflecting the sun, a thin ribbon of water cascading over ancient stone, the hills coated in shades of olive and rust. They weren't kidding when they said we'd fall in love with Morialta.
Such a great exhibit at MOD. The story starts in Borneo. It's the early 1950s and the WHO are working to eliminate malaria in these parts. They spray DDT, BHC and Dieldrin in an effort to control mosquito populations. And it works! During a 21 month period, the percentage of mosquitoes carrying malaria-causing parasites falls from 35.6 percent to 1.6 percent. But (among other effects on the environment) DDT also kills domestic cats, who lick it off their fur and consume it through the small animals who are their prey - and who also have DDT in their systems. This is a kind of bioamplification, where the concentration of DDT in organisms builds up progressively with every step up the food chain and it is particularly devastating to those top predators like cats. And the story doesn't stop there. The drop in cats around town fuels an explosion in the rat population, which leads to outbreaks of slyvatic plague and typhus. The lesson, my friends, is don't fuck around with DDT, but also possibly, everything is connected.
Loading Comments...