At the Kochi-Muziris Biennale, in Thamotharampillai Shanaathanan’s Cabinet of Resistance, there are 30 drawers. In each is a card bearing a sliver of history. They take the form of narratives, photographs and drawings that come from three decades of war, when the Sri Lankan state fought the militant separatist group Liberation Tigers of Tamil Eelam (LTTE). These histories of resistance chart how people negotiated the vagaries of war, including economic embargos, displacements, restricted travel and censored communications.

In one drawer is the story of a woman who learns to cycle at age 50, and discovers her own autonomy through a decade when conflict collapses the public transport system. In another, innovative mechanics respond to a chronic petrol-shortage by converting their classic cars to run on kerosene.

There are other, grimmer narratives. A child cowers from a group of LTTE recruiters in a tar barrel; treasured bridal saris endure multiple displacements, until they are the only material left out of which their owners can make sandbags to defend against falling bombs; farmers discover the versatility of their hoes—used first to cultivate land, then to dig bunkers and finally to bury bodies.

Shanaathanan is in Colombo when we meet, back from Cochin and away from his home in Jaffna. Clean shaven, his head gleams under the lights of a restaurant as he orders his staple vegetarian rice and curry meal. Appropriately, we are also talking about food.

“One of the stories in the cabinet is from a man who used to cook wedding feasts,” says the artist, explaining that one of the dishes—a spicy pirattal curry—was traditionally made out of potato. But during an economic embargo placed on rebel-held territories between 1990 and 2002, potatoes became increasingly hard to find.

The cook’s solution was to devise a dish that combined the more readily available karunaikilangu (elephant yam) and chickpeas in a celebratory mix. It was such a hit that people kept eating it even after potatoes reappeared. Shanathaanan himself likes the curry enough to have placed the list of ingredients and the cooking instructions in a drawer marked ‘Recipe’.

Listening, you begin to understand that for Shanaathanan survival and resistance are sometimes the same thing. “I was looking for stories where people gained some kind of agency, where they found power to cope up with the situation or turn the situation into something else,” he says. He saw in these stories how people made an art out of living through a war. At its most basic, this artist believes art is transforming one thing into another. “From the mud you make the sculpture, you turn the ordinary into the extraordinary,” he says, adding, “Under the right circumstances we all do that.”

The poet Packiyanathan Ahilan has known Shanaathanan since 1986, when they were both still young men. “We had some friends who were interested in arts and literature, we used to meet to discuss cinema and painting, this and that, in one of our houses. That was where I met Shanaathanan.” As adults, both men would work in the Art History Department at the University of Jaffna, where these conversations continued, both with each other and with generations of young students.

Ahilan has seen almost everything Shanaathanan has ever produced, excepting he says school and college assignments, and exhibitions like Imag(in)ing ‘Home’ (2009)—forgivable, since that last was staged in Vancouver. But he did see the exhibition that preceded and in a sense, inspired Imag(in)ing Home. History of Histories (2004) was an installation of everyday objects representing the memory of a home collected from 500 people from all corners of the Jaffna peninsula.

Shanaathanan staged it in the Jaffna Library, which had been burned down by an organised mob in 1981. The library used to have one of the largest collections of books in Asia, but at the time it was rebuilt, many shelves were yet to be filled. The artist co-opted these.  Pieces of barbed wire, old ID cards, spent bullets—all were placed inside rows of clear plastic bottles which took the place of books in the library rooms. There were no other identifiers or explanations.  Unable to separate their grief from that of their neighbour’s, people sometimes broke down weeping, confronted by their collective suffering.

Another work that Ahilan refers to in our conversation is The Incomplete Thombu (2011). Perhaps Shanaathanan’s best known work, the book combines oral histories of the displaced with architectural drawings of their homes. The artist’s response takes the form of drawings. The book has an enduring relevance. Just last year, The Incomplete Thombu was included in the exhibition Insecurities: Tracing Displacement and Shelter at the Museum of Modern Art in New York.

“Shanaathanan is part of our community. [Through his art] he is a witness to what has happened to the victims of war, but he is simultaneously a victim himself,” says Ahilan. Shanaathanan’s family lived in Jaffna through the decades of conflict, and experienced violence and displacement. He saw the fighting devastate his community, as people fled or fell between the closing pincers of the State and the LTTE.

For his part Shanaathanan sees his role shifting over these various projects. In History of Histories, he was a curator but by The Incomplete Thombu he was an artist. “I am the one writing the story. I was telling my story through their voices. Cabinet of Resistance is also like that.” He goes on to make a frank admission: “It is not pre-planned, I am reacting to a situation. I don’t know where I am going but I am in a kind of process and it’s become increasingly complicated and clear. Compared to Thombu for instance, the Cabinet is a much more complex, and concrete project. This is taking me somewhere.”

“Shanaanathanan is developing another way of writing history. It is a kind of raw history,” says Ahilan, pointing out that his friend takes this material and filters it through an aesthetic that is distinctly his own. “He is not loud, he is subtle and that only enriches the rawness of his work.” 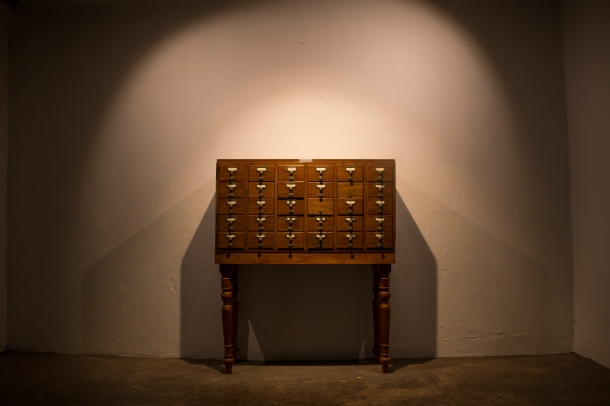 Standing before the Cabinet of Resistance in Kochi, Sanjana Hattotuwa says he found himself marvelling. “Shanaa—and I don’t know whether it is through conscious choice or through some sublime coincidence—always gets interaction design right,” he says. A senior researcher for the Centre for Policy Alternatives, Hattotuwa is fascinated by how each drawer in the library cabinet opens up entire worlds. “By presenting the lives of others through this work, Shanaa is able to transport us, through index cards, into the banality of violence, in all its forms – beyond the enfilade of a battlefield, to the domestic; beyond the headline grabbing deaths, to loss so painful, it can only ever be told as parable; away from the communal to the deeply personal.”

Since the Kochi-Muziris Biennale (which is on till March 29, 2017) kicked off, its curator Sudarshan Shetty has found the Cabinet of Resistance popping up in many conversations. “Even though it’s a very assuming work, tucked away in this small room, a lot of people have discovered it,” he says. He sees the cabinet as something that invites interaction and that asks the viewer to question how he or she perceives memory itself. Such engagement is an act of empathy that spurs the imagination. “The viewer’s own memories come into play,” says Shetty.

Riyas Komu, an artist and co-founder of Kochi-Muziris Biennale first met Shanaathanan in Sri Lanka, while scouting for young artists for another programme and so his first impression of the man was that of a teacher. Meeting Shanaathanan in Jaffna, Komu says “I immediately felt that Shanaathanan was hugely respected among the youngsters as a mentor.” Many of these young people were still struggling to come to terms with what they had seen before and after the war. “But he was quite instrumental in giving them confidence—to think and to react and to make works of art.” 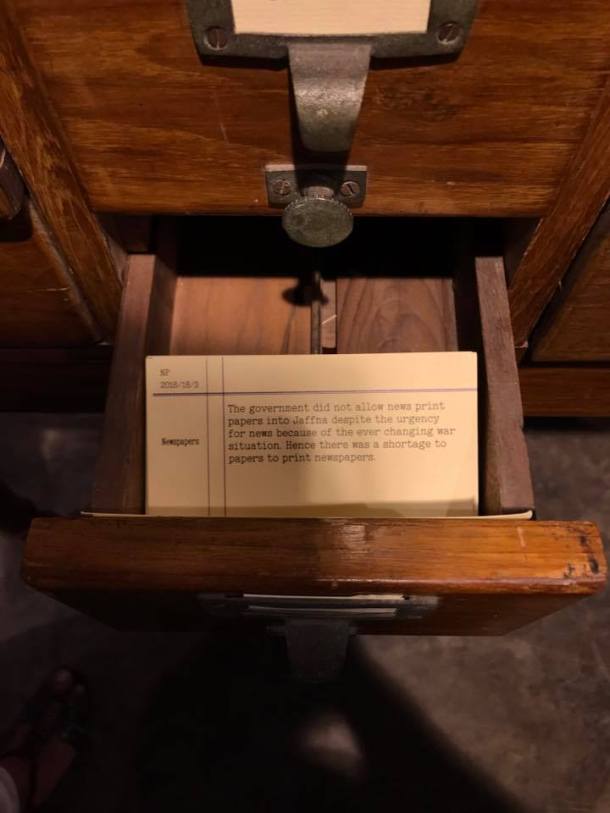 Jasmine Nilani Joseph is one of three young graduates of Jaffna University represented in the exhibition ‘Self Portraits’ now on at the Saskia Fernando Gallery in Colombo. Shanaathanan is at the opening early but he deliberately steps back and so that his protégés field questions from the press and curious guests on their own. “This is good practice for them,” he says.

Joseph’s collection is a series of beautifully sketched fences. Whether made with barbed wire or the more traditional palm or coconut fronds, secrets are embedded along their length. You can see, for instance, where they buried the key to their ancestral house in Jaffna, when her family was forced to flee to Vavuniya. Joseph’s fences engage with politics and history, memory and loss, in a way that I immediately recognize.

After she graduated from the University of Jaffna, Joseph, along with her co-exhibitors Illangovan Dharshiya and Kirusnananthan Inkaran, were regular guests of Shanaathanan’s where they spent many hours working toward these pieces. “When I went to university I liked to paint and draw, but everyone thinks you have to be doctor or an engineer.” Joseph knew she wanted to be an artist, and it was Shanaathanan who confirmed that she could be. “He would tell us many stories. I really appreciated his method of education.” Having relied on Shanaathanan to imagine what the life of an artist was like, Joseph is thrilled to find herself at her own exhibition. “Today is my dream day,” she says.

Back in Jaffna, Shanaathanan is instrumental in bringing artists from the north and south together at the Sri Lanka Archive of Contemporary Art, Architecture, and Design (SLAAAD), which he co-founded. Located in an old Jaffna house, it is an extraordinary place. Every other week, SLAAAD hosts conversations where artists of all stripes, both from the island and abroad, address a small but very engaged audience. The archive is part of the opening up of spaces in post-war Sri Lanka, a gathering like the ones Shanaathanan and Ahilan attended as young men. However, by deliberate design, the archive does not offer an exhibition space.

Shanaathanan himself says he does not want to exhibit in Jaffna—he believes people there already know too intimately the stories he wants to tell. Ahilan adds that the nature of Shanaathanan’s network, the locations where his buyers live, local aesthetics, and the censorship experienced strongly in former war-torn areas likely contribute to this decision, but he thinks that the time will come when an exhibition in Jaffna will seem possible for Shanaathanan. But for his next exhibition at least, Shanaathanan will return to Colombo. He is planning an expanded version of the Cabinet of Resistance–this one with some 60 stories.

Staging this at home will likely see it cast in a particular light. Reconciliation and art have become buzzwords in post-war Sri Lanka but while not against reconciliation in principal at all, Shanaathanan has remained deeply sceptical about the funded programmes that come with their own agendas, and eschews involvement in them.

For Ruhanie Perera, a former curator of the Colombo Art Biennale this stance is intrinsic to Shanaathanan’s politics. “What I find really interesting though is his own resistance to being framed by these circumstances as an artist. While the work emerges through a political consciousness, there is a defiance of classification—be it post-war, war, the minority lens, even memorialization,” she says pointing out that such classifications are constantly encountered in curatorial agendas, biennale-making, funding proposals, and more recently in memory-projects, which tend to pigeonhole an artist. Shanaathanan she says, “disables this gaze.”

For the artist, it is a simple choice. He cannot speak for others, only for himself. “I wasn’t thinking of memorialisation at all,” says Shanaathanan. “My whole attempt is to engage with an uncomfortable path for a better future. For me this project has been about reconciling with myself, coming to terms with my own experiences.”

We went and played with Yayoi Kusama's installation, The spirit of the pumpkins descending from the heavens.
Perfect picnic tree.
Harvest.
Old sea dogs.
Cure for a heatwave.
Ate so much, laughed so hard. ♥️
Loading Comments...