The heavy, metal apparatus standing in R. Lorrence’s garage seems out of place. Its design is simple enough – a pneumatic pump helps pack a mix of explosive chemicals into a slender plastic tube, exerting pressure that a human hand couldn’t hope to match. But it is the only machine in this little cottage firework factory – everything else here is made by hand. “My son designed this,” Lorrence says, explaining with pride that the boy studied science in school. When the rocket is lit, it explodes upward, whistling its way into the sky. Having made its debut just last year, it is the most sophisticated technology Kimbulapitiya manufacturers have access to.

This little village in the south of the island, is known all over Sri Lanka as rathinna gammanaya, literally fireworks village. However, when Kimbulapitiya makes headlines, it is rarely good news. Every year on average four or five people die in this rural community, says Lorrence, the founding chairman of the Fireworks Manufacturers Association of Sri Lanka, and its current vice chairman. This year alone three young men succumbed to severe burns after an explosion flattened their workshop.

According to Lorrence only some 175 people have licenses to produce fireworks in Kimbulapitiya. But he says the actual number of people involved is considerably more – this industry is the lifeblood of the area, and almost no household is exempt. When demand soars, say during The Sinhala and Tamil New Year, or in election season, they will churn out hundreds of thousands of fireworks. Disregarding government regulations, people take the work into their bedrooms and kitchens. Labour laws are more strictly enforced than they used to be, but even children will help out with the simpler tasks. 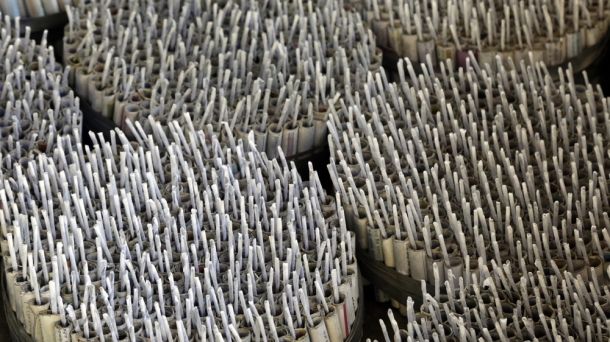 “Gunpowder for us is like a relative, it is a friend. We have lived closely with it for a long time,” says Lorrence. “It there is an accident, we remember it only for a week and then we go back to work. It is in our blood.”

The majority of the ‘factories’ here are small operations, typically hiring 6 people or less in the off season and expanding to a dozen or more at peak times. Most are family businesses, the premises passed down from parent to child, along with the basic knowledge needed to make the fireworks. This is true of Surin Fernando, whose family has been in this business for fifty years. He owns the Mua (Deer) brand of fireworks, while his sister Chamila produces her own range under the name Speeder. Both operate their businesses out of home. Fernando is brutally frank in his assessment of their technical capacity: “We belong in the stone age.”

When Sri Lanka’s nearly thirty year long civil conflict ended in 2009, the villagers spontaneously emptied their stores of fireworks as they took to the streets in celebration. It heralded a boom in their previously flagging industry, and the demand for their products has only increased since then. But today they are struggling under the burdens of labour shortages, poor technology and expensive raw materials. Chinese manufacturers who visited the village were astonished, says Lorrence, to discover that where they played around with some 125 chemicals, their Sri Lankan counterparts had only 7. And what they do have can prove extraordinarily volatile.

Surin admits that they do not always know the properties of the chemicals they work with. “It completely contradicts common sense,” he says. When they are experimenting with something new, it’s a hazardous process of trial and error. In the workshops, people are in constant proximity to substances like potassium nitrate, barium nitrate, aluminium powder, potassium chlorate and sulphuric powder. Factories produce around 24 different kinds of fireworks by hand. Most often the workers gather all the raw materials within easy reach, piling up the finished goods on the other side. It’s a process Fernando describes as akin to “working with a bomb strapped to your stomach.”

It is why the mixers tend to be the most experienced workers in the community. Suresh Prasanna Fernando is trusted by his employers at Jayahanda Fireworks to mix the chemical powders that others will use to fill the crackers. Suresh is 24 now, but has been working in this industry since he was 14. With no formal training, he is all instinct, relying on the sight, smell and the texture of the powder as it is to sieved to know if he has got the mix right. “You have to be very careful,” he says, in something of an understatement.

Today, however, he has been set to work churning out three pointed, triangular crackers. He sits there with pile of explosive powder between his legs. He wears no mask or gloves and will sometimes find himself coughing because of all the powder he inhales. Lung problems are common among the workers, he reveals. The powder settles all over his body, turning his skin silver. Each cracker takes him just under 30 seconds to fold, fill and knot up. Suresh’s efficiency is not unusual, next to him a man he calls Sarath uncle produces some 10,000 to 15,000 of the smaller crackers in a single day. Sarath has been making fireworks since he was 11.  “This is hard work,” he says, “but this is what I know to do, so I do it.”

Workers like Suresh and Sarath earn anywhere between Rs.1000 – Rs.3,000 (approx. $6 – $20) a day and work from 7am to 5pm. Another man named Sona Ramesh, who does this part time says he will usually be paid for every 1000 sky rockets he produces. “The main problem is that we have no life insurance,” he says, “but even people who have lost family members in accidents keep coming back because there is no other way to earn.” He explains that it’s not only the locals who are employed in the industry. Itinerant workers who appear at season time are given a day or two of training and then set to work. Many don’t understand that even a small ember from a beedi is enough to level an entire workshop, says Ramesh. Locals know better which is ironically why accidents are more common in licensed, large workshops than in homes.

KPN Jayatilaka and his wife Lashika Fernando own Jayahanda firecrackers. As stipulated by government regulations, their workshop is on a five acre property and their home is some 150m away from where the crackers are made. They say this industry’s history goes back to the 1940s and to a man named K.E Perera who is believed to have taught the first firework makers here everything he knew. But little has changed since then. “It’s hard to meet the demand because the cost of the chemicals keeps going up but we have to sell the fireworks at the same price,” says Lashika.

Their business feels precarious because of the issue of unreliable labour. Even if they were to attempt to take out a mortgage on their home in order to buy chemicals, they may lose everything if their workforce proves unreliable. When accidents happen, it is the owners who compensate workers and their families, bearing the full cost. They are desperately in need of mechanization, training and support from the government, who they hope will facilitate the imports of safer chemicals.

“There is no lab for us to test the quality of the chemical, and so we have to just mix it and see. Sometimes it is a waste and we have to throw big batches away. But we have to be very careful because things like exposure to sunlight or even morning dew can trigger a fire or explosion,” says Jayatilaka.

The manufacturers here were at the forefront of a drive to block fireworks imports into Sri Lanka but Jayatilaka had a chance to look at the stuff that slipped through into local markets. There were skyrockets that exploded in many colours, and smaller crackers that went off like popcorn. “The packaging looked like beautiful chocolates, you couldn’t even tell it was a firework,” he says, with something like longing in his voice. “We can’t compete with that but we are always trying take things apart and learn how they work.”

Everyone we speak with says they test their products frequently, but that the fireworks are so commonplace that they take little joy in them. The only exception seems to be the Feast of Our Lady of Lourdes, an annual celebration held at the local Catholic church in February. In the weeks before, local producers step up production but do not sell to their distributors. Instead they bring everything they have to the procession where they vie to outdo each other with ever larger displays. New designs are debuted. The religious make offerings of fireworks to fulfil vows or seek favours from the Lady. It does not seem to matter that some are Buddhists, others Hindus.

There can be no clearer demonstration that whatever challenges their work throws at them, the villagers of Kimbulupitiya cannot imagine life without fireworks. Despite the deadly toll it takes, this industry has become inextricably tied to their notion of home, family, faith, tradition and identity.

Back at Thushara Fireworks, Lorrence remains optimistic about their future. His children are internet savvy, and he is keen to see what other innovations they can help him roll out. Will his sons take up the family business? Lorrence says he thinks they will – “Just hopefully in a better way than we have been able to do.”

Published in Al Jazeera on July 4, 2016. By Smriti Daniel. Pix by M.A Pushpakumara.

Harvest.
Old sea dogs.
Cure for a heatwave.
Ate so much, laughed so hard. ♥️
My neighbour has a little pug I love and was sad to hear I couldn't have a furry friend of my own. So, she dropped off this Christmas gift. Place of honour.
Belair on a sunny day.
Loading Comments...