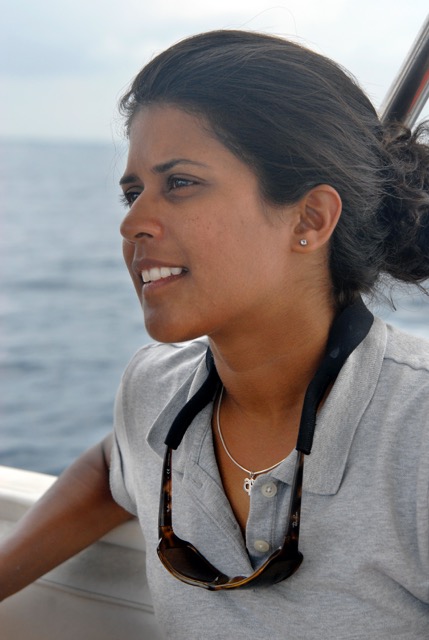 Asha de Vos knew what to expect before the big announcement. “The hardest part was keeping it secret,” she tells The Sunday Times. The only Sri Lankan so far to have a Ph.D. in marine-mammal-related research, de Vos was named an Emerging Explorer by the National Geographic Society in May this year. Subsequently featured in the NatGeo magazine in July, the young marine biologist joins a group of ‘uniquely gifted and inspiring scientists, conservationists, storytellers, and innovators’ who each receive $10,000 to support their research and exploration.

Explaining that the nomination itself came as a total shock, de Vos explains that National Geographic Explorers are picked through a secret system, with potential honourees kept in the dark until everything is confirmed. “When they originally told me, I felt like my sides were going to burst. It was a huge moment in my life.”

She grew up reading NatGeo magazines and recalls being inspired by Arthur C. Clarke. She told NatGeo: “He would come to my swimming club and I would sit with him. He’d tell me these stories about his dives. There was a lot of intrigue around that.” Reared on this diet of adventure and exploration, she would grow into an unusually determined young woman. When she was low on cash after her graduation, de Vos worked in potato fields to save the money she needed to travel to New Zealand. Once there, she lived in a tent for six months while working on conservation projects.

She got one of her biggest breaks when she managed to convince scientists on a whale research vessel that she deserved to be part of the team – she wrote to them every day for three months until they agreed to let her on board. Working as a deckhand on the ship headed to Sri Lanka, de Vos was soon promoted to the team’s science intern.

Today, de Vos has made her name as a marine biologist with her research on Sri Lanka’s ‘unorthodox’ blue whales. A Pew fellow, she is building Sri Lanka’s first marine conservation research and education organization. Now, being named an Emerging Explorer has thrown open doors she never expected to walk through.

“When you come from a small developing nation in the middle of the most understudied ocean basin where being a marine biologist is a rare thing, being part of a global network can help with idea exchange and brain-storming, access to resources and infrastructure, eliminating the feeling of working in isolation and access to a global audience,” says de Vos. “The international community has always been hugely supportive of my work but being a National Geographic Explorer and being featured in the July issue of NatGeo will just help me to take the work to yet another group of incredible people.”

She is yet to decide where she will invest her prize money, but she says the honour has already given her access to exciting and influential new networks. Walking into the National Geographic Headquarters for a symposium last month, she felt she had come home. “The other explorers welcomed me like I had always been a part of them. It was a huge honour and incredibly humbling. It was even more amazing to see how many of those explorers had been following my work over the years – there was a lot of mutual awe for sure.”

It’s a hard won accolade, and one that de Vos intends to use to throw light on some of the challenges facing her beloved blue whales. But de Vos is as unorthodox as the animals she studies, and in that sense this is also a win for women struggling to make themselves heard in what is a traditionally male dominated profession in Sri Lanka.

She admits readily to having dealt with misogyny in many guises – “Everything from being ignored at meetings to getting ridiculously, heart-wrenchingly trolled in the comments sections of my videos when they make their way on to YouTube. Constant questions of my marital status – including if my husband wouldn’t mind me getting black in the sun. I have had hate mail written and circulated about me and I have had people give me threatening calls in the middle of the night.”

But de Vos has used these experiences to fuel her growth and makes no apologies for her ambition – “I hope at least some of those people read this interview because I want to thank them for making me who I am today,” she says, adding, “I love being unconventional and unorthodox. It puzzles people and people constantly ask me if it isn’t time to settle down and get a real job. I guess my job looks like way too much fun to be real!”

In the meantime, her fascination with blue whales continues unabated. “The blue whales that I work with around Sri Lanka were virtually untalked about before I started my work. How is it even possible that we can overlook something so giant and not be drawn in to find out more?” she asks. For her this is a red flag, a warning that there may be many smaller, wonderful things in the ocean that we remain in complete ignorance of.

Even when it comes to studying the whales themselves, there is so much we do not know. She points out that while there were people doing monitoring work on whales in Sri Lankan waters, no one was doing any science-based research on whales before the launch of The Sri Lankan Blue Whale Project.

For her part, she knows this will be the work of decades, a lifelong obsession. But she hopes it will not be a lonely pursuit, and that she will be able to recruit many more champions for marine conservation efforts. Fortunately, she knows where to make a start: “The ocean needs to become a part of our everyday conversation and that can only happen if we start to tell stories about things people are magically drawn to.”

One thought on “Asha de Vos: Explorer at large”

Hard reset.
More than half this year gone already and I don't know where it disappeared. We have so much to be grateful for and so much to mourn, that it feels like a see-saw some days. But here's an up, and a hope that this day brings you something beautiful.
Inside the cheese grater.
Always happy to stumble across one of @peterdrewarts posters in the city, each subverting and reimagining what we mean when we say 'Australian'.
Light Cycles was surreal, stunningly so. Light as a symphony, as poetry; a story sung by the dark.
❤️
Loading Comments...